The army is investigating the incident in Hebron, which was caught on film by human rights group B’Tselem. The mother says the soldiers refused to let him ago until he names stones throwers. The Israeli human rights organization B’Tselem has released a video purportedly showing Israel Defense Force soldiers taking a Palestinian boy of about […]

Leaders from various Palestinian political factions have written a letter to the United Nations in protest against the removal of a report criticizing Israel for imposing an “apartheid regime” of racial discrimination on the Palestinian people. The senior Palestinian political figures handed in the letter, addressed to UN Secretary-General António Guterres, to the world body’s […] 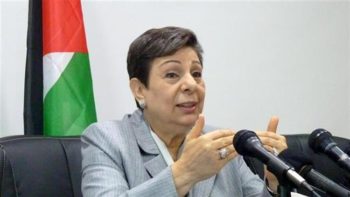 The Palestinian Liberation Organization (PLO) has condemned the UN for revoking a report accusing Israel of imposing an apartheid regime on Palestinians. “Instead of succumbing to political blackmail or allowing itself to be censured or intimidated by external parties, the UN should condemn the acts described in the report and hold Israel responsible,” said PLO […]

Dr. Saeb Erekat on Another Raid and Closure of a Palestinian Institution in Occupied East Jerusalem

We strongly condemn the illegitimate closure of the Mapping and Geographic Information Systems Department of the Arab Studies Society and the illegal detention of Mr. Khalil Tufakji this morning in Occupied East Jerusalem.  Mr. Tufakji is a distinguished scholar from Jerusalem and the Director of this academic department within the previously forcibly sealed off Orient House […]

Statement by H.E. Mr. Mahmoud Abbas, President of the State of Palestine, Before the UN Human Rights Council (UNHRC) at the 34th Session Held in Geneva

Your Excellencies, Distinguished Members of the Council,UN Secretary-General, President of the UN General Assembly, High Commissioner for Human Rights, Minister of Foreign Affairs of Switzerland, President of the Human Rights Council Session, Representatives of Member States, International Organizations and Civil Society, Ladies and Gentlemen, I am honored today to attend this session of your distinguished […]